A very present past: cassettes

In the “Blast From the Past” segment, from Startup Portugal’s podcast, the speakers dive into supposedly obsolete, but still alive, technologies. In this article, we discuss the first of these objects to be mentioned in the program Start Now, Cry Later, the cassette. 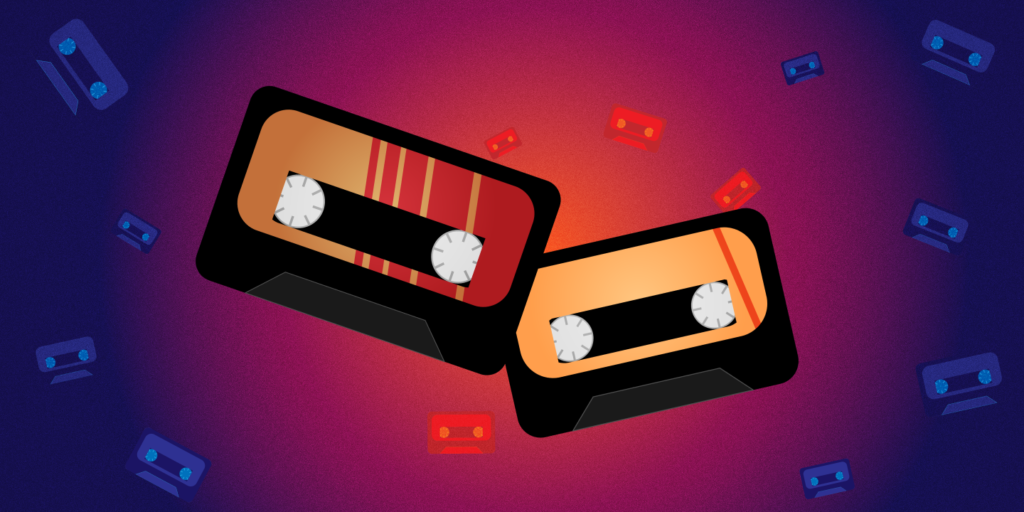 In the “Blast From the Past” segment, from Startup Portugal’s podcast, the speakers dive into supposedly obsolete, but still alive, technologies. In this article, we discuss the first of these objects to be mentioned in the program Start Now, Cry Later, the cassette.

“Blast From the Past” is one of the segments in the podcast Start Now, Cry Later, a Startup Portugal project led by journalist Mariana Barbosa. In this segment, Startup Portugal delves into history to find the technologies that were expectedly dead, but remain healthy. As is the case with cassettes – yes, this odd space object that held the monopoly of distribution of music, mainly romantic and the so-called Pimba, in gas stations.

We all hope that an object so bulky relatively to the duration of music it can handle, would be completely out of circulation in the era of streaming, Spotify, YouTube and the massive consumption of data converted into sounds. We are already spoiling the end of this article by saying: this has not happened. To paraphrase Mark Twain, when news of his death was circulating prematurely, the rumors about the death of the tape are frankly exaggerated. Even more so in Portugal than elsewhere in the world. But we’ll be right there.

The cassette is a fundamental part of the sharing music sharing in the 90s, being even the essential technology for some of the hip hop empires that emerged in the United States, for example. The cassette, for its cheap production and relatively portable format, served as the main means of distribution of alternative artists until the industry could no longer ignore its commercial potential.

The very own 50 Cent, classic name in hip hop history, at the turn of the century, began to gain reputation for the constant “mixtapes” (cassettes recorded in homemade format) that he put out, and this was how it caught the attention of the legendary producer Dr. Dre. Even before Curtis Jackson, the civil name of rapper 50 Cent, the legendary Wu-Tang Clan swept the streets of New York with their tapes, a venture that earned them the status they enjoy today — it is no coincidence that they are part of Bill Murray’s circle of friends.

In Europe, the history of the cassette may be a little different, but its unique characteristics served as the basis for a series of labels that operated on the sidelines of the record industry, a phenomenon that has extended the life of the format to the present day. in the most western of gardens in Europe, the format lived beyond consumption – because it is here, more specifically in Maia, monopoly that the last factory that produces cassettes on the Iberian Peninsula still operates, eDisco. Moreover, the activity of eDisco already serves as proof that the cassette is alive and is recommended, at least to those who still have how to listen to them.

It’s not something from now, the return of the cult of physical formats. Known people like Nuno Markl, through his various programs, brought vinyl records back to the spotlight, although this has never gone out of circulation thanks to the DJ culture. However, the pressed rings returned to the shop windows and artists such as Adele took in force the production lines of the factories in Central Europe, which maintained the cult of the 33 or 45 rotations to rotate. The windows of the major media content stores, increasingly filled with records, only came to give strength to the trend.

The cassette strongly appeals to this same cult of the object, but it is in its weaknesses that it still becomes interesting — its quality is not close to that of a vinyl record, nor the ease of finding a reader, but all this is reflected in the cost price, much more accessible to any independent artist. As a result, the profits they have end up being higher by being able to sell the object at modest amounts that do not impact their margins, and by operating in a logic almost of marginal economy, without large chains of stores or record labels involved in the distribution.

Thus, not only do we know that eDisco, the last Mohican of cassettes on the peninsula, continues to operate, but its production of cassettes has never ceased, producing and distributing a little throughout all Europe. And with increasing sales volumes. Portuguese independent labels remained aware of this reality. Labels such as those of Lovers & Lollypops (mainly through the sub-publisher Tapes, She Said), Meifumado Fonogramas, or Holuzamresort to the format often, and there are even those who dedicate themselves to release mostly the so-called “tape”, as is the case of Rotten/Fresh and Labareda. Out there, you can see this phenomenon in labels like singular Awesome Tapes from Africa.

If you thought the cassette was obsolete, you’re not looking in the right places. The format has not disappeared and seems as alive as ever, sharing some of this vitality with a group of artists who do not fall into the ears of the big record companies, but who has the ability to create trends and, truth be told, will take the risks that these big companies no longer ponder, even. The cassette is the venture capital of the sound arts, and its rapid injections of money have saved a lot of art from oblivion. The City Council of Porto validated this idea by supporting the Found Tapes Porto project, which is conducting a survey of cassette production in the city of Porto between 2004 and 2019.

The cassette, more than a “blast from the past”, is a culture of exchange of ideas that keeps the cultural fabric pulsating and thirsty for new things. But it’s a blast from the past anyway, and one that came straight out of the Start Now, Cry Later podcast. This content from Startup Portugal, where this article was originally thought of, can be heard through this link